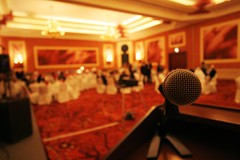 Mel Grubb read my post on Public Speaking and Movement onstage and inspired me to write this post with his comments.

“I think a good background in stagecraft could benefit a lot of public speakers. Simple things like basic blocking, “cheating” your face toward the audience, finding and eliminating your particular “tics” or problem words, etc. Speakers who say “basically” more than once every five minutes drive me up a wall.  ‘Essentially’ is even worse.” – Mel Grubb in comments and email.

He struck another of my nerves. I was on a conference call just yesterday with people that will go unnamed partly because I don’t want to call out anyone (don’t worry it’s no one local) and partly because I can’t remember who was talking or what they were talking about because I was so distracted. I IMed with Larry Clarkin about it and this is a snip of the conversation.

My wife actually reminded me of a story from a class that she took where the professor used Um and Ah non-stop. There was at least one lecture where they focused on counting the number of Um and Ah’s that he used rather than listening to the presentation.

The primary reason that speakers fall back on these type of words is that they are used to fill the air while the speaker is constructing the next sentence in their head. Even though most speakers are terrified of it, Silence is still ok. Some call it Golden. There’s a huge difference between dead air and silence. Dead air is when nobody is saying or thinking anything. Silence is when it’s quiet.

In addition to my background in theatre, I was a member of a ToastMasters International for 4 years.

In fact, I was president of my chapter for a year. As an organization, they have a great curriculum for teaching people the basics of speaking. While we, including me, have been obsessed with the format of the slide deck, they have been continuing to educate great speakers by focusing on delivery and real speech writing. There’s a series of talks that you have to give. Some of these are using props. Some are very serious and dramatic. Others are humorous speeches. Side note – I actually took second in a regional humorous speech competition with a speech about the plight of the thumbless in America.

One of the components of a Toastmaster meeting is an “Ah Counter”. This is a person who sits in the back of the room and listens for filler or crutch words. When they hear these, they take a note and they ring a bell. It’s the most aggravating thing in the world! The first talk that I did there, despite my background in theatre, sounded like a parade.

“Um, ah, so it’s like, um, well, you know a thing that you, ah, might basically find in, um, your, ah, backyard” – Josh Holmes in one of his first public speeches.

You might think I’m joking but you’ve done it too! There were more filler words in my talk than content. When I realized that it was astounding. After a while, you start consciously weeding out those filler words. You will be at lunch somewhere and be ringing that bell yourself inside your head. At some point later, you have eliminated most of them from your vocabulary. Unfortunately, I’ve slipped in the 9 years that I’ve been away from ToastMasters International. I’ve started noticing that I’ll start repeating words in my speech pattern. I’ve started answering questions with “Sooo, the answer to that question is…”. I have got to stop! It’s annoying me. I can’t imagine what it’s doing to you listening to me.

I hope that you’ll take this to heart and start listening to yourself speak. First, look for a ToastMasters’ club near you with their handy meeting locator. There are 10 clubs within 20 miles of my house and I live in the sticks. If you can’t get to ToastMasters, or really even if you can, you should tape your sessions and review them. Watch for movement, speech and more. Make notes and practice with those notes in hand.

This will help you be a better speaker. Even if it’s not obvious to you, two things will happen. First, you’ll be able to say more in less time and second, people will focus on your message rather than your quirks.