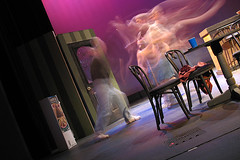 Movement when speaking is very important.

“Acting is, therefore, the process of illustrating the dramatic action – through activity. Activity is the how; action is the what” – Play Directing by Frances Hodges

For those of you who don’t know, I was a theatre major in college. Specifically, I studied directing. I was a decent actor but directing was what I really enjoyed from light design to directing actors and the full blown play. For a ton of reasons, I ended up with an English degree with a minor in Drama and a minor in Communications.

Recently, I was asked to critique a talk by a friend of mine. One of the pieces of feedback that I gave him was that he wanders while speaking. I expressed it as it drove me nuts, but I didn’t really go into detail so I’m going to do that here.

I chose the word wanders for a reason. I started thinking about how I would have directed the talk if it were a play and I was directing him. The blocking (movement that the director lays out for the actor) is very important as it emphasizes the meaning of what’s being said (or not said) at the moment. One of the many exercises that actors and directors go through when preparing with a script is to tear apart the script line by line, sentence by sentence and assign verbs to those lines. Every line in the script has a verb and action.

“If you can sense the action, the verb will come easily to you” – Play Directing by Frances Hodges

Thinking about the first quote – if the action is the what, the action is what you are trying to get the other person (in public speaking this is the audience) to do or feel. The activity (movement) is how you conveying that to the audience. When you are giving a talk, you are typically trying to convince the audience of your ideas and thoughts around the given topic. To do that, you have to be careful about how you convey your thoughts on stage. Think carefully about each thing that you are saying and what you are trying to get the audience to do or feel with that and what verb and activity should go with that. Are you going to threaten the audience? Retreat from the audience? Are you going to ignore, shame, beg, torment, entrance, lead, relax, motivate, berate the audience? These are verbs and you should think about everything that you say in a talk as conveying some verb. Once you understand the Action and Verb, the Activity, read walking or gesture or other visible motion, that you make on stage will become obvious. Each and every activity is there to illustrate the verb to the audience. It’s extraordinarily difficult to motivate an audience while sitting. On the other hand, if you are leaning back against the front of the table, it becomes easier to relax the audience.

The reality is that it’s the same in public speaking. It kills me to see someone walking backwards or sideways or heading back to the podium when they are making a big point. What this says (yells, screams…) to the audience is that they don’t believe in this point because they are retreating from the audience. As this poor soul gets to the podium and finish the point as they get there – right when they put a large obstacle between themselves and the audience. These are not things that the typical audience member will consciously pick up on, but they will on a subconscious level. If they didn’t, directors could go home and actors would wonder aimlessly all over the set. When someone is pacing aimlessly back and forth on stage, they are wandering or lost in thought and pontificating so the audience will automatically start to wander in their thought train as well.

The solution is to block out your session. In other words, choreograph your talk so that your movements match the verbs that you’re trying to convey. I’m not going to pretend that this is easy. Especially since many talks have a decent amount of improvisation in them. The trick is to figure out what your big points are and make sure that you nail those.

One way to get started is to pick two spots that you are allowed to be at in the room. Call them home and away. Home will be placed somewhere in the middle of the stage with easy access to your laptop and your water. Away will be closer to the audience and slightly to the right or left of center of the stage. While you are at home – pretend that you a playing basketball and you have to keep one foot planted. You can move your upper body all that you want to but the lower body has to stay still. Only after you have decided to really make a point will you start moving and it will always be movement the the away spot and it’s the build up to a point. While making your point, plant on the away spot with both feet square to the audience, shoulders back and speak clearly in a loud firm voice. Hold that position for as long as you need to for the point to really sink in. I’ll often make a point and then wait 10 or more seconds for it to sink in. Maybe I’ll even wander back to “home” and take a drink while letting it sink in. And then you slide back home to reset before your next point.

As you get comfortable with that you can start getting fancier and start doing more and more.