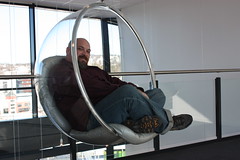 I have the privilege and honor of doing a tour of across Europe talking to PHP developers about running on Azure and on IIS. The countries that I ended up in are Ireland, Portugal, Austria, UK, Norway, The Netherlands, Belgium and then I went back to Ireland. That included 2 conferences and 6 Microsoft run events.

The way that the trip came about is that I was invited to keynote PHPUK 2010 and since I was going to be in Europe already, Beat Schwegler organized for me to visit the other countries. Big thanks out to him for organizing the whole trip.

The topic in at the Microsoft run events was “Scaling Big While Sleeping Well” which is a talk about PHP on Azure.

Ireland was the first place that I did my Azure session. There were roughly 20 people in the audience. 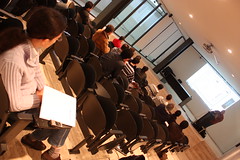 On the plus side, we had quite a few people in the audience and they were engaged. I had a ton of good questions and hopefully I answered them all. Also, it was a fantastic venue. It was in the new library building for one of the local colleges – Faculdade Nova de Lisbon. The venue was a real tribute to the college as it was a gorgeous facility and the room was almost acoustically perfect. 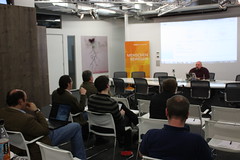 This was my first time in Austria. My brother and sister both have done college studies in Austria so told me lots of different things to do while I was there. I was a little disappointed in the turn out at this event as it was only about 7 people there including Rolf Mistelbacher and Gerhard Goeschl from Microsoft.

Another cool thing in Vienna was that I got to catch up with an old friend Andreas Erlacher who showed me around downtown Vienna. 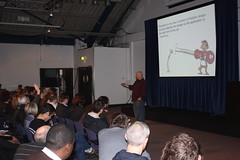 One of the extremely cool things that I got to do is keynote at PHPUK 2010. I did my Lost Art of Simplicity talk as an uncon session at ZendCon. Scott MacVicor heard about it and was kind enough to pitch it to the board of the conference. The session went over really well and got a lot of great feedback on Joind.in – in fact it’s currently the most reviewed talk on Joind.in. 🙂 Considering that there were roughly 450 people in the audience and 500 at the overall event, it makes a lot of sense.

I want to thank Johanna Cherry, Matt Raines and the rest of the organizing committee for their organization and hospitality.

Since I was doing the keynote, it didn’t really make sense for me to do another session as well. Rob Allen, however, stepped up big and did a session on Azure. Turns out that he had not looked at Azure prior to Will Coleman and I asking him if he’d be interested in doing the talk. Not only did he say yes, he did a fantastic job as well. I was also pleasantly surprised that there 52 people in the room to hear about Azure. 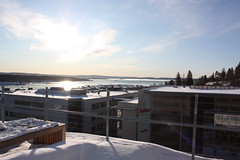 This was the first time that I had been to Norway. I got really lucky with the weather. Evidently the week before I was there it was –18 Celsius but it was –4 (roughly 25 Fahrenheit) which is actually a lot like how I left Michigan.

There were 12 people in the audience + Rune Zakariassen who was gracious enough to host me for the day. I also had a chance to meet with Petter Merok, the Developer and Platform Evangelism lead for Norway. 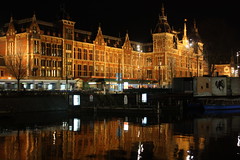 I’ve been through Schiphol in Amsterdam a lot of times but not really gotten to spend much time outside of the airport itself. Also, it was fantastic to have a great guide around Amsterdam in Juliette Folmer.

The session itself was a joint meeting hosted by Microsoft and PHP Benelux. PHP Benelux is a cooperation of the Netherlands, Belgium and Luxemburg PHP user groups. Big thanks to Stefan Koopmanschap aka @skoop and Bram Veenhof for organizing in the Netherlands. There were two presentations. First was Jan-Willem Eshuis from NOS. NOS is a public broadcast network in the Netherlands that manages all of the sports broadcasting in the country. He talked about Service Oriented Architecture and how NOS has been able to reach the scale that they have. It was a lot of fun talking with him about how they were managing and broadcasting the Olympic coverage. The second presentation was mine. It was a small group, 5 people, but they were very engaged and I almost didn’t make it through the materials… 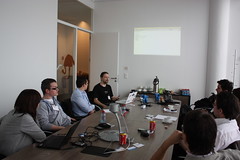 I met with the Belgium branch of the PHP Benelux user group the next day in Brussels. This was another small but great meeting.

As with the previous meeting, there were two sessions. The first session was by Michelangelo van Dam aka @dragonbe. He took one of the Zend Framework sample applications and ported it from Linux to Windows showing how easy this process can be. This was cool because it gave between the two of us we were able to point out the power of the web.config from showing off simple configuration and setting up the FastCGI handler to showing the URL Redirect bits.

Next I talked about Azure. Here I got my my personal favorite compliment of the whole trip. It came from a hoster who came in hoping that he wouldn’t like Azure as it’s in direct competition with his business. He begrudgingly told me after the meeting that he was impressed and liked what he had seen. 🙂

Big thanks to Katrien de Grave for hosting me all day and organizing the meeting. It was also great to get to finally meet her after thousands of emails back and forth on various topics.

I had a ton of fun on my tour even though it exhausted me completely. 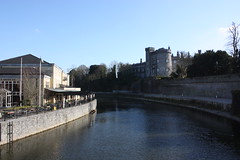 I had the pleasure to attend and speak at WordCamp Ireland March 6-7, 2010. First off, huge kudos to the whole organizing committee especially Sabrina Dent and Katherine Nolan. The whole event was extremely well run. From the amazing venue to the session line up, I was impressed with the whole event.

Second, big thanks to Martha Rotter who worked with Sabrina Dent to get me a speaking slot and reschedule it for day 2 to make sure that I’d be there in time.

This was my first ever WordCamp and I have to say it was an interesting experience. There was an amazing blend of extraordinarily technical folk and completely new to web/blogging/technology folk. My favorite question that I got was, as I was explaining my job at Microsoft and that I work with a lot of PHP developers. The question was “What’s PHP?”. On the other hand, I had some great technical conversations with folks like Alastair McDermott, Joost de Valk and Michele Neylon. 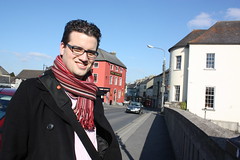 My favorite session at WordCamp Ireland was called Site Clinic put on by Joost de Valk aka @yoast. He had a couple of slides where he laid out who he was and then said that this session is really just called “Stressing Yoast out for 50 minutes.” He asked the audience for suggestions of web sites. Then he gave them advice about how to better manage SEO (Search Engine Optimization) and the like. He knows what he’s talking about. Do a search for WordPress SEO and see what I mean. 🙂 Some of the top pull outs for me that I’m going to be incorporating into this site when I do a major overhaul in a few weeks:

Becoming a Social Media Guru and Make WordPress Your Bitch

Sabrina Dent gave a great session on Social Media and WordPress – http://www.slideshare.net/SabrinaDent/how-to-become-a-social-media-guru-and-make-wordpress-your-bitch. One of the big points that she hit on is that having people on a social network site such as facebook or twitter is great but the real point is to get them to your own site. To that end, make sure that you drive traffic in the right directions.

I also liked her use of PPTPlex for the presentation – it looked pretty awesome and I’m going to have to start using it going forward.

You can find out about all of the tools that she highlighted and download her slides on her blog at WordCamp Ireland 2010.

I also gave a talk about running WordPress on Windows. Really this is a running PHP on Windows with all of my demos being WordPress related. My favorite bit was installing WordPress, including pretty URLs, on Windows in about 3 minutes through the Web Platform Installer.

I uploaded my slides to Slideshare.

It was also fun learning more about Rugby. Evidently, according to Alastair, I’m built perfectly for it. I played a little backyard pickup Rugby in high school but there wasn’t really any rules and I didn’t really understand the game. I’ve found myself, since getting home, watching all of the Six Nations matches. I’m still not 100% on all the rules and such but I’m learning.

Really hoping that I get to go to WordCa
mp Ireland again next year. It was a great event run by and attended by great people.