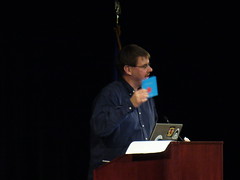 Larry Clarkin put up a post called “Technology should not make you more productive“.

When I first read this, I was stumped trying to figure out why one of the more progressive technologists that I know would say something that bizarre but as I read the post, it snapped into focus.

His opinion is that “Technology should not make you more productive, but it should totally change the way that you work”.

I couldn’t agree more. I think back on the way that I worked even a couple of years ago and how technology has transformed my outlook and way that I work. It’s no longer apples to apples comparisons. Tasks that used to take me hours or weeks to complete are either irrelevant or wrapped up in a single statement that I can delegate to something else. Think about the way that we write code these days verses yesteryear. I used to spend weeks and months writing data layer code, front end population of fields and the layout of the screens for even the simplest of applications. At this point, I wire up a fantastic ORM, such as NHibernate, SubSonic, ActiveRecord or any number of others, get the XAML form from a designer and wire the databinding in seconds. That allows me to largely ignore the “plumbing” code and focus on the business logic. I’m still writing the same number of lines of code a day, but it’s completely different code than I used to write.

I think about Cell Phones, SMS, Email, Twitter, TripIt, Dopplr, Plaxo and all the other technologies/applications that I use every single day of the year and it has completely transformed the way that I work. I used to be fanatical about getting someone’s email address. Now, I’m setting up most of the CodeToLive episodes through Twitter. At this point, if they are on Twitter, I often DM someone on twitter instead of trying to email them. At one point in time, that would have been over email. Prior to that, it was phone. Prior to that it was in person or not at all. 🙂

But if you think back to other truly disruptive technologies, such as the boat, train, car, plane, rocket, transporter (wait – not yet but I’m sure that it’s coming), each of these have completely transformed our society. There was a time when getting on a boat for the new world meant a zero probability that you were going to see your family again. Most people lived within miles of where they were born because travel and moving meant giving up everything. Now in an age of jets, good friends and family stay in contact over XBox Live or Skype or Twitter on a daily basis with complete and total location independence. This is an exciting time as technology is starting to bring people closer together rather than pushing them apart.

I’m looking forward to the next technology that really revolutionizes our technology rather than incrementally improve what we already have.

What do you think it will be?

Larry Clarkin – Technology should not make you more productive