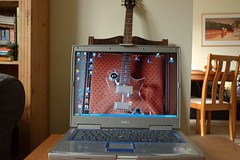 Guitar Hero for adults is coming!!! I really don’t want to knock Guitar Hero and Rock Band but they are just not for me. Honestly, (and this is not bragging, it’s just a fact) I’ve never played either one. If I’m going to spend the time to learn an instrument, it’s not going to be a plastic one that is only useful in the context of my living room. I completely get the social aspect to it and think it’s a great game in a party situation. I just don’t have the patience to devote to it to get decent enough to enjoy it in that party scenario.

I’m just really amazed at stories like this 9 year old kid on YouTube that is a Guitar Hero rock star. And his parents are proud enough of this fact to put this on YouTube. If only they could channel all that talent for good! If he had just started learning a real instrument – he could be the next Eric Clapton, Jimmy Page or Frank Iero! He’s definitely got dexterity and focus to do it – if he could be channeled correctly. Seriously, how does a 9 year old kid get to be that good at a video game? Oh yeah, I’m forgetting that it’s usually the 9-12 year olds that hand me my tail on a platter in Halo 3 or Call of Duty 4. Complete side note (which is weird as this whole post is a side note), I had a thought that we should have an “over 25” segment of the XBox live network, not for “Adult Entertainment” but rather as a way to even the playing field for us that have jobs, families and only a couple of hours a week to devote to gameplay… Thoughts?

When I was talking to Jason Follas and Dustin Campbell over beers just after Guitar Hero was coming out and all the hype had started up I had the idea that I’d really rather have a way to hook up a real guitar to the XBox and/or computer and “Play” to learn. We had talked through some of the hookup options, like pro audio cards that can take a real 1/4 in jack and all the sound you can pump at it or the 1/4 jack to USB options that are out there. Dustin is actually a good enough musician (Plays in a pro-band and the like) and programmer (tech lead on CodeRush) that I was hoping that I could talk him into doing it because he’s got the chops to do so. Didn’t work. He didn’t bite.

The fantastic news is that he doesn’t have to. Today, Jason pointed out that there’s a startup called Guitar Rising that is creating that “game” for us! They are planning to release sometime in 2008 – and I’ll be among the first to buy one. I’m really stoked! I’ve been wanting to learn guitar but with my fairly severe ADD I haven’t had the patience to do so. I really hope that they pick songs from all over the spectrum from rock to blues. Besides just being able to play, I’d really like to get to a point where I can play camp side and at sing-alongs. Obviously, that’s not all hair bands, there’s a lot of Jimmy Buffet and the like that’s needed. There’s already been twitter conversations about how the hookups are going to work, what type of guitars we’re going to hook up and more. According to the article, you can hook up via a USB hookup or even just a Mic. I’m assuming that they are looking for pitch and notes and that’s all they care about. That’s pretty slick.

Looking forward to playing Guitar Rising at the next CodeMash!