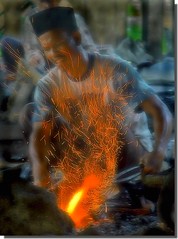 This was a big enough bit that I thought that I needed a separate post from John Lam on IronRuby at the Portland .NET Users Group.

One of the things that John Lam addressed in his session was how submissions are going to work with the DLR and IronRuby. There are three separate bits, the libraries (this is most of the language), the core compiler (this is the interface between the libraries and the DLR) and the DLR itself.

IronRuby will take contributions to only the libraries until they get a whole lot closer release of the compiler and the DLR. Right now the DLR is such a moving target that it doesn’t make sense to have people contribute to the layers that run right on top of it as it’s likely going to change.

IronRuby will take contributions to the core compiler once 1.0 ships.

The DLR will be released with the MS-PL license, but it will likely not ever accept contributions. This was a bit of a shocking statement to me when he said that but then he explained it. It was a bit of a gloss-over though so I’m not sure that people caught this. The DLR will ship inside of the CLR which ships inside of Windows. Therefore, they can’t accept submissions to the DLR because they need to keep that IP pure.

When he said that a lot of things snapped into place for me. I’m not sure why I hadn’t thought of that myself. If they don’t keep the Windows IP pure, they are opening themselves up for potential lawsuits from someone who’s IP was injected into Windows without the proper licensing in place and so on.

FYI – you should check out http://www.microsoft.com/opensource/default.mspx. It talks about Microsoft and it’s views on Open Source. It might surprise you.