I am currently in Crested Butte, CO and I had a heck of an adventure getting here. I have been a long time MapPoint user with a GPS and it’s never failed me. In fact, it did get me here this time, just in a slightly more hair raising manor than I had anticipated. To fly into Gunnison, which is 45 minutes or so away from Crested Butte would have cost me $1,200 or so when I could fly into Denver for $500 and rent a car for roughly $200 and have a scenic drive. I chose Denver. When I get to the rental car lot, they tried to give me a Taurus. 🙁 I asked them for something else… They gave me a Dodge Nitro with 4×4. I’m really pleased with this choice and get started on the trip. As is my habit, I pull out my bluetooth Holux GPS device and fire up Mappoint 2006 for driving directions. I really like the 2006 edition because it talks to me. I don’t even have to look at the screen – in fact I usually just put the laptop on the floorboard and listen for directions. And I start driving. 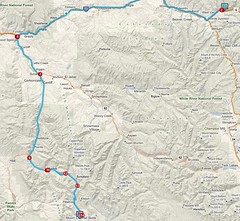 The route has me traveling through Vail and up to Glenwood Springs and then over to Crested Butte. This is a gorgeous trip. It truly is some of the most beautiful country side that I’ve ever had the pleasure to travel through. I once, when I was a teen, came up with the family and camped for several weeks just outside Eagle, CO. That was amazing and is still one of my fondest memories growing up. We have friends in Eagle that own land that they let us camp on right on a small creek – oh yeah, this creek grows and widens over 1,469 miles as it’s the Arkansas River.

Back to my current trip… I turn off of i70 at Glenwood Springs and start heading into the mountains. I’m awestruck by the scenery. It was a little disconcerting when the road turned to gravel as I passed Beaver Lake. However, I know that Crested Butte is a little ways off the beaten path so I’m not concerned too much. And, how could I pass up this scenery. I keep going, still following the GPS, and come to a little town called Marble. Marble is a quaint little down that borders the national forest. It’s name such because there are huge chunks of Marble in the town. There are some people that have done some more elaborate work with some of the loose pieces but it was kinda cool to see raw marble in Marble.

Shortly past Marble though, I passed a sign that made me stop and recheck the map. It said 4 Wheel Drive Only Past This Point. Whoa! What does that mean? Well, the map still said that I was on course. I thought – well, I am in a 4×4 and this is Colorado and I don’t get the chance to do this very often anymore – so what the heck. I kept going.

The road gets a little rutty but nothing bad. I’ve done worse in my old VW Jetta that I had when living in Arkansas so I wasn’t all that worried about it. Somewhere in here I did realize that this can’t be the only way to Crested Butte, but I’m having fun.

Then I see a sign that says “Detour Ahead is Open Only to High-Clearance 4WD Vehicles”. Ok – this is getting more interesting and what’s the definition of “high-clearance”?

However, at this point, I’m behind a Range Rover and I’ve definitely got more clearance that it does. The trail was narrow, rocky, a little rutty but it wasn’t too bad at all. The most interesting part was at the bottom of a tight little hill where there was a creek that we had to cross. It was somewhere between 12-18 inches deep but it had a rock bed so it was no issue. I’m having ton of fun at this point just taking my time and moving through slowly. I was going 3-5 miles an hour most of the way.

The drive was beautiful. I saw flowers, trees, deer, odd buildings and more. There was one in particular that I stopped at and took some pictures at. It had been around since 1892 and it was a “two story out-house”. Just pas this I drove through a little town called Crystal. I thought this was a wild idea – this town that could only be accessed by 4×4, helicopter, foot or horse back. I did see a lot of horses there.

I was about 3 hours in when I saw a sign that made me stop and really think about this proposition. It said “Attention Drivers Extremely Rough Road Ahead. Vehicle Traffic Discouraged. 4×4 with Experienced Drivers and Narrow Wheel Base Only”. Wow – that’s quite a statement. I stopped the truck and looked at the GPS – positive that I was way off course at this point. Nope – I was still right on track. Ok – now what? I started thinking about the past couple of signs and thinking about the fact that they had been a little overblown. And then I looked on the map and thought about my options. I could either push on (I only had 3.5 miles left according to the map) or I could go back and around. Then I started looking at the map solutions and it was going to be 3 hours back to pavement and then 3 hours around the mountains to get to Crested Butte by a different route.

I’m still not positive that I made the right choice – but I decided to push forward. I really didn’t know what I was getting into… It started out fine until I got to a point where I had to get out of the truck and take a look down the slope to see what was coming. This was a touch nerve-racking but it looked fine once I got onto the hill. Then the real fun start up. I now know that I was at the “Devil’s Punchbowl”. There’s a tight little valley that’s probably 75 yards across with a beautiful waterfall and pool at the bottom that I didn’t get pictures of because the camera was the last thing on my mind at that exact moment. I stopped at the bottom and watched a modified Jeep go up the hill in front of me. There were a few tight places but it made it. I sat there for about 10 minutes watching that Jeep and rethinking my decision to go forward or not. This was the scariest moment in the adventure. I stared at that hill and finally decided to push forward. There was one moment where I was positive that I was done. I was pushing up the hill and there was a LARGE rock in the middle of the road, the road was slanting away from the hill and towards the drop off, I couldn’t see the road out of the drivers side window because the edge was too close and my oil light came on all at the same exact moment. I can’t repeat the words that went through my head at that moment – not because they were dirty but because it was unintelligible goo sliding out of my ear as my brain melted in fear. After a few seconds that took years to complete – I pulled it together and made it past the rock. Eventually I got to the top of the hill and it evened and widened out. Now I’m trying to figure out what happened with the oil light. I’m positive that one of the times that I bottomed out I must have punched a hole in the oil pan and I’ve just killed the rental car. How am I going to explain to them where to pick up their car? I’ll never be able to rent from this rental agency again… Just then, the oil light went off. WHEW! It was just that the hill was steep enough that all of the oil had slide to one side of the pan and away from the sensors… Wow – that was a steep hill.

I had just pushed through what’s known as Schofield Pass. This is the “Deadliest Pass in Colorado”. Once I got to safety, I looked it all up online and the first hit that came back was Code 4×4 – Schofield Pass Pucker. It talked about how tough and scary this pass is. Different sites had different death tolls but they ranged from 14-19 over the past 20 years. Did I say that I’m really impressed with the Dodge Nitro? All of the locals in Crested Butte have been very impressed that I came through the pass and that I made it. Bruce Eckel said – “I’m not sure what to think of that, I’m not sure if that makes you crazy or not. But everyone here (in Crested Butte) is a little crazy so maybe it means that you fit right in.” I’m the first person that he’s known that’s actually followed the map all the way here – a lot of other people are a little smarter or saner than I am I guess. 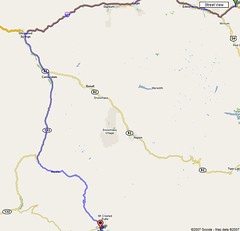 Now – how did Mappoint get it so wrong and send me over this death trap? I’m not sure but I verified that Google Maps point you over the exact same passage if you are traveling from Vail to Crested Butte.

So, I got back to civilization and Dianne Marsh twittered to me – “Did you go the way that I told you not to go?”. Oh crap – that’s right. She and I were on IM and she told me that the map programs were wrong and told me to make sure that I came in through Gunnison instead of Marble.

The moral of the story here is to verify directions with locals when dealing with the map programs.