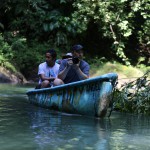 Justin Bronder in a boat at Rio Clara

The first time that I met Justin Bronder, he was just back from a trip that he acted like was the trip of a lifetime. He showed me amazing pictures of obscure birds and crazy little monkeys. Actually, the first picture that I saw was of a monkey’s behind as it mooned the camera. I thought he was nuts, that he was was awesome and that we’d be friends all at the same time. Turns out I was right on all accounts.

Fast forward a year and I know for a fact that Justin has got one of the biggest hearts that I know. And amazingly, he headed back to Costa Rica and invited me to come with him. Something in Costa Rica had touched him and he wanted to share that with more people. 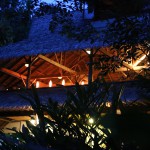 The restaurant at Copa de Arbol at night.

While I was excited to go, I really didn’t know what to expect. Justin had talked about the both the jungle and 5 star resort and pointed me at the hotel web site – http://www.copadearbol.com. When I looked at the web site, I saw that it was both – a 5 star resort in the middle of the jungle. There were some other things that were fun. The resort is right on the edge of the Corcovada National Part which is a green zone. There’s no roads to the property so everything is water taxi or hiking. That made me even more excited.

I talked to my wife and got permission to go.

Honestly though, I didn’t spend enough time researching Costa Rica. That was a failing on my part.But I didn’t look at the amazing country that I was about to go to other than seeing it’s in Central America. I spent a little time reviewing my pathetic Spanish. “Gracias”, “Hola”, “Adios”, “Caliente”, “Frío”,  “Uno, “Dos”, “Tres”…  I spent some time looking at my camera gear, picking up waterproof backpacks (I picked up an awesome one – Phantom Aquatics Walrus 25 Premium Waterproof Backpack Dry Bag) and the like.

It was all completely selfish but the good news is that despite this failing, I was ready to start packing for the trip.