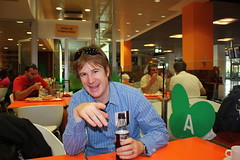 First, let me just say thanks to Beat Schwegler who set up the whole trip. He has an interesting role. He is the technical leader for DPE in Western Europe. He’s a great mentor and I’ve learned a lot from him.

So what was I talking about? I was really talking about building Rich Internet Applications with Silverlight from an architect’s perspective. The first part of the talk is really more about usability and user centric design than it is Silverlight in specific. The second part of the talk is an expanded version of a talk that I first did with Mike Labriola and later with James Ward. I added a ton of specific material about Silverlight to it. The whole deck is up on slide share and embedded below. 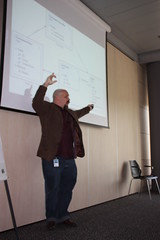 I started off my trip in Spain. Madrid to be exact. I had a few days to adjust to the jet lag before I had to speak. This was cool because I got to see a little of Madrid and get to know the people. This included, among others, Cesar De la Torre Llorente, Isabel Gomez Miragaya, David Salgado Bermejo and their manager Enrique Fernández.

I started off the “work” portion of the trip by doing a couple of interviews. The first of these was with a CIO magazine called Computing Magazine. I probably went a little too poindexter on the poor reporter on top of the slight language problem. Overall though, Cesar was pleased with the interview. The second interview was, thankfully for me, with a technical guy who runs a technical magazine out of Spain called .NET Mania.

For my public session, it was packed with close to a hundred people. They had very slightly overbooked the room anticipating some drop-off but there was a lot less drop-off than they usually get so it was jammed. The session went well, despite the language barrier. Beat had warned me that of all the countries, Spain would be the biggest issue as people speak less English there than anywhere else on my trip. France would be a close second but that wasn’t a scheduled stop. I just spoke as clearly and slowly as I could (and got thanked for it on the break). Even so, Cesar ran though a quick high level version of my session in Spanish as soon as I was done. 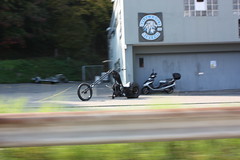 After my session, I flew to Switzerland where I spoke at the partner council meeting organized by Ronnie Saurenmann and Stefano Malle from the Swiss DPE team. There were about 15 consultants from around Zurich that were there including Atif Aziz who I know from way back when I was doing a lot of training and Laurent Bunion who had just finished writing a new book called Silverlight 2 Unleashed for Sams. They obviously were prepared for the session and asked a ton of really tough question. It was cool though to see the excitement around the technologies. I want to send a big thanks out to Christian Gross who set me up with a user group meeting at Credit Suisse. I love talking about dynamic languages. Here I got to talk to the group about IronRuby and IronPython following a short session that Christian did on F# and the functional programming concepts in C#. It was a smart crowd with good questions.

Afterwards, I got to spend the weekend at my friend Christian’s house. We went hiking through the mountains and even saw this slick looking motorcycle outside of a Swiss custom bike shop…

Next up was JAOO in Denmark. We started out the week with a dinner organized by the Microsoft guys from Denmark including Daniel Mellgaard Frost and Martin Esmann.

JAOO was an awesome conference and I was honored to be part of it. They had an amazing number of industry greats: 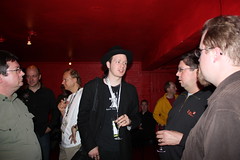 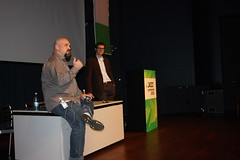 One of the things that I did was a joint session with James Ward from Adobe on the best and worst practices of building RIAs. We had about 175 people in this talk. The great thing about this talk is that when we are talking about applications, there are many practices that we can talk about. I’m prepping a much longer post with that deck that will go up later today or tomorrow.

Following that, I talked about Silverlight specifically with about about 150 people and had a full day tutorial on Friday with about 15 people. The tutorial was interesting as my video adapter on my laptop got damaged and I had to borrow one of the student’s computer. The interesting part there was me struggling through on a Danish keyboard… Definitely a different layout for all of the special characters. 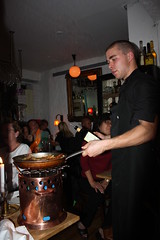 I loved Denmark. The people were over the top friendly. After a dinner at Klassic 65, James Ward and I wanted to go grab a scotch before heading to bed. Sorin, the owner who had already dipped into his private wine collection for us, was trying to give us directions to a great scotch place. When we failed the test with all of his usual landmarks, he said – “Ok, then I’ll take you” and piled us all into his station wagon and drove us across town to the scotch place. That was cool! I really dug Klassic as they cook in the old ways. According to what I understood from Sorin, the cooks and much of the wait staff have to pass a certification test. Part of the testing is this antiquated set of methods that include doing the Flambé at the table with the crepes and so on. However, after doing it for the test, none of the restaurants actually use this knowledge. Sorin decided to go for it. His little shop has limited room and a very short set of dishes. They typically offer 4 starters, 4 entrees and 4 desserts and they do those few items amazingly well. The wine choices are far more plentiful. Sorin is a master as picking the wine for the meal.

More pictures from Denmark found in the sets Klassic 65 in Aarhus, Speaking at JAOO with James Ward and Denmark. 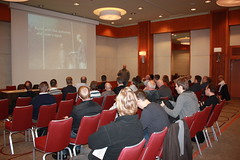 I love Sweden. One of the conditions that I had for taking on the trip in the first place was that I get to spend a weekend in Sweden. It turned out that Richard Hale Shaw was wrapping up a class in Stockholm the day I arrived. We hung out that evening and had dinner at very cool local Jazz club.

Unfortunately, it rained all day Sunday. That aside, it was a great day. I had dinner in the old town (Gamla Stan) and hung out people watching all day. It’s one of my favorite pastimes.

Monday I met up with the local evangelism team, including Jonas Torstendahl and Robert Folkesson.

I did a public session at the Sheraton with about 50 people. It was a great audience – mostly consultants that came with solid questions. One of the attendees had actually already been doing quite a bit of Silverlight including a Greeting Card application that they are working on getting ready for release on Codeplex.

*update* – the Greeting Creator is on CodePlex at http://www.codeplex.com/greetingcreator.

More pictures from Sweden found in the set Views from the Nordic Light in Sweden and Speaking in Sweden. 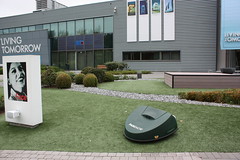 I really wish that I had more time in Belgium and in Holland but I only had a day each. I got in on Monday night and was on the train Tuesday night. In the mean time, I got to meet several of the Belgian evangelists, including Philippe Destoop, and do a public session. I really liked the facility that we were in. It’s called Living Tomorrow and it’s all about the future of sustainable technologies. They had a set of solar panels out front that had an LED display that showed how much energy it had generated and how much of that energy had been used. The whole venue was the latest and greatest technologies from a number of different companies. They had touch panels on all of the refrigerators to show the ingredients. They had automated lights and lighting control in the auditorium. They had automated lawn mowers. They had an amazing amount of cool tech. 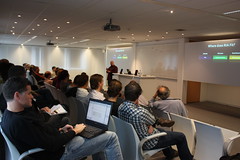 Next up was Holland. I took the train into Amsterdam and then caught a cab out to near Barneveld where the session happened the next day. I stayed in a cool little spa type of an hotel that was nice and old school. Right down to the old fashioned iron key for my hotel.

Following the public session, we had a two more meetings. One was an interview with Web Designer Magazine. Here I was joined by Martin Tirion, Holland’s User Experience Evangelist. The second one was with one of the TV stations to discuss their systems.

More pictures from Holland found in the set Speaking in Holland.

From Holland I flew to Ireland. This was the final stop on the work tour. I started off with a long meeting with Sean Foley, the evangelism manager for Ireland. He had a tremendous amount of great insight into the the tech industry, Microsoft, politics and a ton more. It was great to meet him and learn from him.

I had a number of side meetings during the day and an evening event. The meetings were with two different training companies that are ramping up for Silverlight and a company that’s been doing Silverlight application development since Silverlight Alpha 1.1 called Zignals. They have a pretty cool set of chart controls specifically tailored for the financial industry. They had some really deep and technical questions. I’m hoping that I was able to help them out… 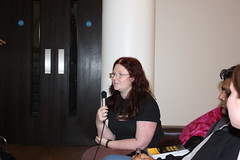 The next meeting was also really cool – Martha Rotter, the local DE, had set up an interview with a lot of the local dynamic languages folk from around Dublin. That included Ana Nelson from Ruby Ireland, Jaime Hemmett from PHP Ireland, and Sean O’Donnell and Vishal Vatsa from Python Ireland.

That was a ton of fun. I’ll be posting that on WiresideChat soon. 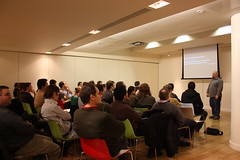 Last stop was the public session that I did in Ireland with about 75 people in attendance. It was a varied group ranging from consultants to people that work on the Live platform for Microsoft out of the Dublin office. It was impressive how many people came with good and solid questions ready to ask. There was even a couple of people with written lists of questions that they wanted to make sure that they wanted to get answered. Martha told me afterwards that the crowd is usually very reserved and doesn’t ask a lot of questions – but they were really enthusiastically engaged during my session.

More pictures from Ireland found in the sets Dynamic Languages in Ireland and Speaking in Dublin.

I learned a ton from my trip and hopefully was able to help people out. I’d love to hear from those that were in the various sessions about how they are applying anything that I talked about.