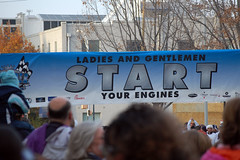 I’m giving a talk next week at the Microsoft Worldwide Partner Conference (WPC). I happen to be in the fun position where I’m directly following the keynote. I’ve sat in on content reviews and keynote writing sessions so I know the messaging from that talk and the overlap that there will be with my session.

One of the services that they offer to their speakers is a speech coach. It’s the first time that I’ve worked with one one on one. I sat through a class offered by a different conference a number of years back. It was fairly useless so I didn’t have high hopes for another speaker coach. Boy was I wrong.

I met with Cathy Banks of Communication Power, Inc. I cockily told her that I have spoken at hundreds of conferences and typically get 8s or better on my evals. Turns out I’m not the only speaker out there that’s had Cathy change the way that they speak – here’s a post by Lee Lefever talking about his 10 lessons learned from his speaking coach.

I talked to her about the fact that it often takes me 3-4 times to really nail the ending on a talk. It’s been a constant problem that I’ve had on how to end a talk. I often run over time because I’m rambling trying to figure out how to finish a session.

Cathy, to my surprise, insisted that we start on the opening. I’m not usually concerned about the opening. I have a fairly casual style that sets the audience at ease and gets their attention.

It was brutal. She had me do the opening, asked me how I thought it went. I was relatively pleased. Then asked me what the point of the talk was because she obviously didn’t get it from my opening. I ran through the highlights of the talk and pointed out the top level message that I was targeting.

All of the sudden, I saw the issue with the opening that she was pointing out. I was rambling through the opening without clearly framing the overall message for the talk. My opening was entertaining, but really didn’t succinctly tell the audience what they needed to get out of this session. That’s the hook that gets the audience to listen for the rest of the session.

Then she asked me what I knew about the crowd. I felt good about this because I knew the target demographics pretty well and was able to talk to that. It’s mostly going to be business level folk in the room. These are management, business-development folk, business owners and so on at this conference. But then she turns it on me asking how my overall message related to this crowd. My message was far to technical and this audience really doesn’t care. I need to give them the couple of technical sound bytes but really hit on how they are going to make money from all of this.

With all of that in mind, I tried my opening again. It felt better but was still a little off.

She took a crack at an opening off the top of her head. And nailed it. As I parsed out what she had just said, I thought through my version of the opening. It was funny but was not nearly crisp enough. It wasn’t well defined as an opening. It was talked to the crowd now but still didn’t hit the 2-3 high level points that I was going to dive deep in for the rest of the session.

I tried it again. And again. And again. Somewhere in here, she started goading me on saying, “Come on Josh! How’d you get through those hundreds of conferences? Tell me that story. I know you’re a story teller so tell me the story!”. Yes it stung, but wow it worked.

Things started to crisp up. I started off my opening with a continuation of a story from the previous talk. I carry over some of the language from the keynote as well. This will help with continuity and really draw the connection between the keynote and my session. I hit the two points that I wanted to hit, gave a solid hook, did all that in a humorous manner and in less than a minute. WOW! I was thrilled.

Now that I had my opening down, Cathy asked me to jump to the closing. The first one was a little rough. Then she asked me to run through the opening again and jump immediately to the closing. That was killer. I got a fairly solid closing on the second try. Two more refinement rounds and I was set. I carried the language through from the opening, tied off the ends on the two points that I wanted to get across in the session and had a solid call to action.

As Cathly pointed out to me VERY clearly, the reason that I couldn’t close a session crisply was that I didn’t have a good opening. With a good opening comes a good closing.

All that’s left is the stuffing in the middle.

Keys to a good opening

Understand the audience. This helps you target the content at the right level.

Understand the message. I put this second because there are a lot of messages that don’t apply to all audiences. But this is a critical part of the talk. Many talks that I see don’t really have a “message”. They just want to demo a technique or something. The best talks had a solid call to action and are trying to motivate people to do something.

Set up the language for the rest of the talk.

Write it out. Apollo Ideas has a post called Prepare yourself that discusses the different levels of preparation you can have for a great presentation. I talked about it a little in my post Prepare Yourself To Give a Great Talk. This is especially true for the opening and closing of your session. These are the times that you are in the most control of your session.

Don’t worry about establishing credibility. Because you’re onstage, you already have the credibility that you need. The conference has given you that. It’s your credibility to lose, not gain. Nobody cares how smart you think you are. They care what you’re going to be talking about and the points that you’re goign to be making. Chris Bernard usually does his whole opening and then gives people his contact information. I’m going to steal this idea.

Have fun. If you’re not having fun, the audience won’t either.

*Update*
I forgot to put this in the original post. Cathy did all of this over live meeting from a conference room in Seattle on a speaker phone. The mics for the speaker phone were actually in the ceiling so at some points of the hour long session, Cathy was standing on top of the table so that I could hear her better. It was awesome.