A few weeks back John Hopkins forwarded me a video from TED. Specifically he sent me a talk by

Clifford Stoll called “18 minutes with an agile mind” that he thought reminded him of me. Not because of the brilliance that he showed but because of the ADD nature of the speaker. I was blown away. One of many great quotes from the session was “The first time that you do something, it’s science. The second time, it’s engineering. The third time, its just being a technician. I’m a scientist. Once I do something, I want to do something else…” Wow! I want to be a scientist! Or maybe an engineer helping others perfect it. Like a baby introduced to sugar, I was hooked.

6 hours later, I was able to get up and away from my computer mostly because the forces of nature (battery died on my laptop) were forcing me to move. I sent John a reply questioning his lineage (something about you BAS****, you burnt my whole day) and thanking him at the same time. I decided that rather than spending 6 hours a day watching Ted videos, I needed to get a cadence and figure out a routine that would let me get my “fix” in every day.

Every morning during the week I get up, I get the kids ready for school, ship them off to the bus and then it’s my own little 30 minutes where I cook breakfast and watch a couple of videos. Some of them are 5 minutes, some are 20. That usually affords me time to watch 2.

This morning, for example, I watched a short interview with William Kamkwamba called “How I built my family a windmill” and Stefan Sagmeister talking about “Yes, design can make you happy“. Indulge me for a few moments as I walk you through these sessions.

William is a young man (19 in the interview) who at the age of 14, living in rural Africa in a small agricultural town, designed and built a 2 volt windmill for his family. It powers 4 lights and two radios. He built it out of bicycles, plastic piping and pulleys. He found and read a book called “Using Energy” (which I would love to get my hands on but can’t find) at the library. In some immortal words “I get information about building windmill and I try and I make”. Not only that, but he modified the design in the book to include 4 blades instead of 3.

He had come to the conference in hope to get some help building out a 20 volt windmill to supply irrigation for his entire village. He’s hoping to spend his life in the pursuit of green energy.

I’m truly humbled by that ingenuity and ambition.

Stefan is a designer from Austria with a passion for making people happy.

Early in the talk, Stefan made a list of the moments in his life that he could think back on as really happy moments. I wonder if I could make that comprehensive of a list. I need to do that at some point. Or at least make a list of things that do make me happy.

He said “the visualization (of happiness), that’s a really easy thing to do …. much more difficult is where designs evoke happiness”. At that point, I almost burnt my eggs as I listened enrapt for the rest of the talk. The point was made in reference to the Mori Museum in Tokyo. It has an exhibit called “Happiness” broken out into 4 sections called Arcadia, Nirvana, Desire and Harmony. It was a very nice exhibit but Stefan realized that it was all about the visualization of happiness, not about happiness itself. That’s easy. The hard part is creating the happiness in the first place.

There are three projects that he pointed out. The first one was the project where an artist named “True” redesigned all of the subway safety posters in NY. One of these posters is pictured to the left. No, he wasn’t hired by the city to do it. He just did it. He organized 20 of his friends and, without a lot of fanfare and definitely no announcements, placed these on all the subways in NY. They fit into the surroundings and people don’t really notice them until they start staring off into space and all of the sudden it hits them what these are. That’s fun and I’m thinking about what that would look like on planes. There’s also the amazing point here that he knows that he’s making people happy but he doesn’t have to be there to watch them. He doesn’t have to take credit. What a wonderful sense of humor. Personally, I’d have to ride the subway all day everyday and subtly (or as subtly as I can muster which, as you know, is not all that subtle) point it out to everyone. 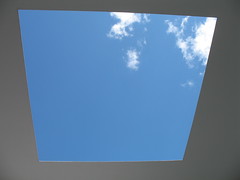 The second project that he talked about is a room called Sky Pecher by James Turrell. It has benches around the sides and a retractable roof. That’s it. But when you’re sitting it in, you don’t see the horizon or anything else around, just the sky. The clouds rolling by, the blues of the sky, birds flying over… It alters the way that you look at the sky and all of your surroundings. Also, very importantly, it’s not visualizing happiness, it’s just letting people focus on the sky without all of the other things that go into life that clutter and overshadow much of our happiness.

I was reminded of when I was a kid and would take the center of 2 paper
towel roles and use them as binoculars. It wasn’t that it actually zoomed in that mattered. It was the tunneling of my vision to that which I was looking at.

Try it. Spend an hour looking through paper towel roles at an object. The grass in your front yard, an ant hill, a soccer field or follow in James Turrell’s footsteps and stare at the sky (not the sun, the sky). It will change the way that you look at life around you. It’s such a simple project but an important one to think about.

The third project is the Bubble Project. An artist named Ji Lee printed up 30,000 speech bubbles and placed them on ads and signs all over NY. He didn’t write in them. He just posted them. Other people came along and filled them in. There’s some amazingly good writing in some of them. Very witty thoughts. There’s also the normal bashing or ranting of this that or the other, but some are outstanding. Look at the one on the left here. “Yo”. It’s very simple but really captures that person’s view of what’s happening in the painting.

You can actually print your own if you want – he’s got the bubble template here.

It’s an interesting thing though – just by adding the caption bubble, Ji Lee has opened up the door for others to express their thoughts and mentality, sharing that with the world. This is a fun project because it changed the way that I’m looking at a lot of the art and ads around me. Rather than just looking at the ad and figuring out what they are trying to convey, I’m starting to look at ads and projecting my own thoughts on it. It’s the “Saturday TV Fun House” idea where I can take something completely out of its intended context and have fun with it.

I’m really impressed with TED partly because it’s so different from any of the conferences that I go to. I always end up at technology conferences where the the majority of the talks are tips and tricks versus visionary talks. What do I mean by visionary? These talks are designed to change the way that you think. It has for me. Every video that I’ve watched has altered the way that I think about something. Life, technology, work and so on. I have only shared the two that I watched today and I’ve been watching at least 2 a day for close to a month now.

1. Watch a TED video every day. It will change your life.

2. Let’s put together a TED style conference. Aimed at technologists but aimed at visionary talks. Let’s change the way that we think about life, technology, work… Anybody interested?

3. Tell me what you’re favorite TED video is.