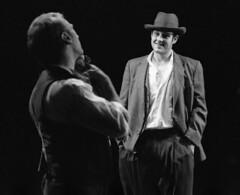 Preparation is key in giving a great presentation. Apollo Ideas has a great blog post about the speech spectrum. There are basically 4 ways that you can give a talk.

1. Completely written out word for word and read of the script. For this, you can think about your basic graduation speech.
2. Just outlined but not rehearsed. I see these too often. This is where someone has had an idea for a talk but is not able to prepare properly. Or someone got a deck from someone else and presents it cold without really making their own. In this category, there are a lot of sales decks and user group talks done. It’s a shame because they could be so much better.
3. Outlined and well rehearsed. This is where the majority of the good conference talks lie.
4. Completely written out and well rehearsed. In this category, you can put the better political speeches or talks from really high end conferences such as TED. Think JFK’s Inaugural Address, Reagan’s “Evil Empire” speech or any other political speech that motivated a nation.

I’ve heard the argument that you don’t want to sound “too rehearsed”. However, the real danger is coming off as unprepared or reading from the script. Either of these are monumentally bad compared to over-preparing. Really the “too rehearsed” script is the one that you’re not willing to deviate from when there’s a good question or unexpected audience reaction. I’m striving for that right blend of well prepared and rehearsed contrasted with the ability and willingness to improvise.

You can also equate these with musical performances. Singing in church, while often beautiful, is often far from a professional band. But if you look at Big Bad Voodoo Daddy, Great Big Sea, Harry Connick, Jr. or any number of other groups that put on an amazing show. That show is completely scripted and rehearsed until people are ready to drop to prepare for getting on stage. Yet, nobody complains that they are “too rehearsed”.

I know that I’ve gotten lazy in the past and have neglected this preparation in the past.

Know your subject. First and foremost, you have to know what you’re talking about. Or at least know what you don’t know. Honestly, one of my favorite talks was at the first Day of .NET. I was on a call with Jason Follas who was coordinating speakers and he asked me what I was talking on and I said “Something cool and ASP.NET”. So that became the talk. I had no slides, no code, no preparation. I just got on stage and asked the audience to ask me questions. I loosely organized that into an outline and started talking. It was great but I could only get away with it because I knew my topic, ASP.NET, as well as I did. I had been doing leading 5 day training sessions on ASP.NET for several years so I knew the ins and outs of the technology extraordinarily well.

On the other hand, I’ve seen speakers get up and say that they are an enthusiast verses an expert (nod to Alan Stevens and Michael Eaton) and I think that’s awesome. They are stepping up and stretching themselves. But, they are not getting up blind and pretending to be an expert. They state very clearly what they know and don’t know.

Know your audience. I tell very different jokes and even use a different cadence depending on who is in my audience. If I’m talking to 100% technical people, I can tell jokes about management or process or self deprecating humor about geeks. If I’m talking to people in the south, I relate to the cooking, fishing, hunting and other cultural things that I grew up with in Arkansas. If I’m in Ohio, I don’t mention Michigan if I can help it and vice versa. 🙂 Know the team rivalries, local economy and other hot buttons. For example, in Michigan, I don’t mention unions. In Houston, I don’t even pretend to know anything about aeronautics or say anything about gas prices.

How receptive will your audience be to your message?
Are they “ready for action”? If so, they just need to be motivated into action. You can bring out the big brass marching band and getting everyone singing the fight song and stomping their feet. It’s a lot of fun to give these speeches.
Are they supportive? If so, then you need to clearly lay out the arguments and call to action.
Are they neutral? If so, then you need to persuade them to your side. This is accomplished through solid information and personalizing the message to the audience in front of you.
Are they hostile? Here you need to understand the FUD (Fear, Uncertainty and Doubt). This is a tough thing to do because the balance of dispelling the FUD and not attacking is a fine line.

As a Microsoft Evangelist, I’m VERY often in the situation where I’m speaking to a non-Microsoft friendly crowd. It’s not often overly hostile, just not friendly.

Give your talk out loud. Two weeks ago, in preparation for the West Michigan Day of .NET, I was writing a new talk. I knew roughly what I was going to say. I had the deck pretty close to finished and was just polishing things up. But I had dinner with Dan Hibbits and decided on a lark to run through my deck once with him. He didn’t even have to say anything but as I went through my pitch I realized that major parts of the talk didn’t work. I immediately restructured the talk and gave a much better talk the next day. I would have realized that about 15 minutes into my talk if I had not practiced it out loud with Dan the night before. Practice in front of the mirror, or run through your talk in your head as you’re on the airplane or in the car on the way to the venue.

The call to action here is simple. Set yourself up for success by preparing to give a great talk. The better prepared you are, the better the chances are that you’ll get your message across and really knock it out of the park.