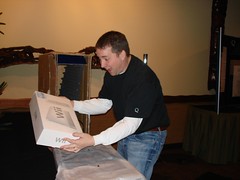 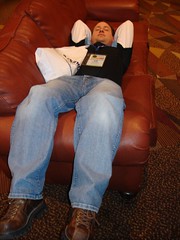 It’s out in the open now… Jeff Blankenburg is my new Developer Evangelist for the Heartland District (Michigan, Ohio, Kentucky and Tennessee). I’m really looking forward to working with Jeff. He’s got passion, technical chops and stage presence. It will be a lot of fun to work with him to channel all of that power to good. 🙂  For those of you who don’t know him – you should make a point to meet him in the near future. He’s a good guy who will offer a lot to the Heartland District. You might have seen his work before as he was the designer behind the CodeMash gear head logo. He was instrumental in the logistical support for CodeMash. He helped with the web site, registration and ran thousands of errands.

He’s leaving Quick Solutions to join us. That’s the only downside here. It’s been great to have Jeff in the field as a community influential and independent voice. This is going to be a strength of his though as the main focus of his job is to help grow this community. As he knows the community, it should be second nature to interact with the community and help them out. I’ve talked to Brian H. Prince about Jeff’s new position. While he’s sorry that he has to loose Jeff, he’s proud of Jeff and is excited about Jeff’s future at Microsoft.

For those who are asking “What about Drew?” – Drew Robbins is leaving to be the IIS7 Technical Evangelist out of Redmond. This is a huge move for him and a good one for Microsoft. Drew had been doing of this work already speaking at PHP conferences internationally (including Russia) and more.